'Atlantic Salt,' released in October 2021, documents a range of emotions: heartache, anger, acceptance, love. Written entirely by Sisay and produced by Jeremiah Bermel, the record is dreamy and vulnerable, and at times, devastatingly sad. 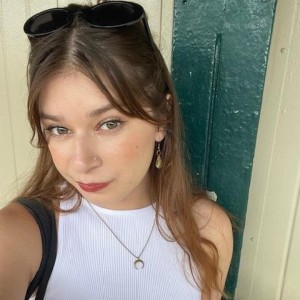 Madeleine Beck
Brooklyn-based writer with a focus on music and culture, and M.A. candidate in NYU's magazine program. On Twitter @madeleinebeck_.

When Olivia Sisay started writing songs for her debut album Atlantic Salt, she wasn’t setting out to create an entire project. “I was kind of feeling restless and a little bit unfulfilled, feeling like I wasn’t very good at the things I was trying,” Sisay says.

Despite playing music for most of her life—starting with the violin at 4—Sisay drifted more into the realm of visual arts, which she ended up attending school for with a focus on mixed media which included a big mix of fashion, performance, sculpture, fibers and drawing. She eventually jumped back into music, though she still struggled with an inability to write songs. But when the pandemic hit and she had nothing else to do, she decided to give songwriting another shot. Atlantic Salt was born.

“It was like this weird explosion that happened,” Sisay said. “It was actually the biggest emotional outlet I ever found in my life, it was a huge surprise to me.”

The album, released in October 2021, documents a range of emotions: heartache, anger, acceptance, love. Written entirely by Sisay and produced by Jeremiah Bermel, the record is dreamy and vulnerable, and at times, devastatingly sad.

It opens with the lullaby-esque track “Come Down,” as Sisay sings, “I’m hard to love but the time is now / the ground’s gone to freezing but I’m warm somehow,” over a softly strummed acoustic guitar. The lead single, “Boy for You,” is an upbeat track despite its melancholy lyrics. In the beach-set music video for the song, directed by George Malouf, Sisay’s warmth radiates through the screen as she shyly smiles at the camera, builds sand castles with friends, and splashes around in the water. Sisay cheekily self-describes herself as “making music your ex listens to.”

When Sisay moved from New York City to Boston, it was a big change of pace; it took her a while to come around to her new home.

“I have friends in different pockets of the world,” she says. “But Boston is definitely my hometown at this point. It took me what feels like a long time to build that community. But now anytime I think of leaving it, it makes me really sad. I would never want to leave this awesome group of people. Everyone has been so loyal to me and so kind, and had their ears wide open for me.”

A big part of the community she’s formed can be found at Vivant Vintage, the second-hand shop in Lower Allston where she’s worked for the past three years. “They’re like a family to me,” Sisay says.

Sisay recently visited her hometown in Pennsylvania, where her whole family still lives. Sisay mused about the impact of nostalgia for childhood we feel upon returning home, noting, “I feel like when you go back to somewhere where you grew up as a kid, you kind of refer to your child self a little bit—I start to feel like a baby.”

“Like, I don’t even act like this when I’m on my own. But for some reason, I’m leaving my laundry on the floor, and I’m not doing my dishes, and I’m acting like a kid again.”

The album’s title track “Atlantic Salt” centers on the role home plays in the face of heartbreak, with lyrics like, “Head on your lap, nose pressed to your thigh / thinking Pennsylvania couldn’t wait to see me cry / I’m coming home, where time can be slow.”

Sisay, a queer, Asian American woman, is happy to be the representation that was missing for her when she was younger, and wants everyone to understand that people like her can do anything they want. But on the flip side, she felt a strange advantage in her ability to find idols in unexpected places. “There’s something about boy bands, to me, that’s magical and terrifying,” Sisay says. “They’re so chewed up and spit out by the industry that you just can’t help but sympathize with them and want to know everything about them.” NSYNC was her biggest inspiration growing up.

Sisay also cites Alanis Morrisette as one of her favorite songwriters in the world and one of her musical influences. “She’s like a certified kind of crazy girl,” Sisay says. “I love that about her. She’s so unashamed of saying the most atrocious things. She’s someone who’s been through a lot, and it totally makes sense for her to feel really strongly about things. But her lyrics blew me away every time.” In the same vein, Sisay loves Avril Lavigne and the juxtaposition of her princess and tough girl personas.

One of Sisay’s favorite parts about making music is getting to play live shows. “It feels like we’re all throwing a little party when we do it,” Sisay says. “My favorite thing in the world is to throw an event or host a party. I get to meet new people, I get to see old friends, I get to wear a little outfit.” In July, Sisay played her biggest show yet, at music festival “NICE, a fest,” which took place over three days in Somerville, Massachusetts, a city neighboring Boston.

Despite her affinity for music, Sisay isn’t striving to be a full-time career musician. “I think the fact that I don’t have any financial dependencies on music is what lets me do it freely,” she says. But this shouldn’t be taken as a lack of enthusiasm; she’s continuing to write songs and book shows, and she recently announced a show with Lady Pills and Layzi in Somerville at The Rockwell. Tickets are available here.